A pair of American couple has been to seventeen counties so far. The wife will put on the same wedding dress in different places and to take photos as a souvenir.

Geoff Salvador and Jennifer Salva Heat who are both from US had their wedding held in 2008, after which they started a honey moon travel all around the world that had never stopped. Bride Jenifer would ask for a photo in the same wedding dress she wore at the wedding. It was estimated that the wedding dress had walked a distance for more than 2000 thousand kilometers along with Geoff Salvador and Jennifer Salva Heat. 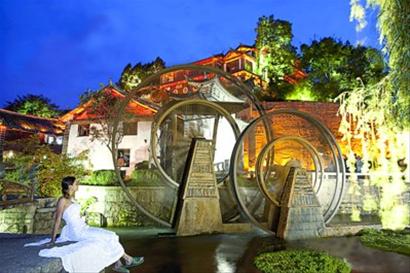 Mr. and Mrs. Salva Ge came from Medford, New Jersey and held their wedding near a volcanic vent on the Easter Island of Chile on 19th, March, 2008. At that time, Geoff, who was a photographer himself, took three wedding photos for Jennifer, who was in a wedding dress, at different spots and times. It was exactly these photos that an idea of having a honey moon all around the world and taking pictures in different places occurred to them.

Apart from America, they had been to China, France, New Zealand, Vatican, Egypt, Peru, Iceland, Norway, Switzerland and Jamaica up to now, crossing a distance of more than 2170 thousand kilometers.

Geoff would record Jennifer’s beautiful image that was in wedding dress with his camera. Jennifer had put on the same wedding dress for more than 100 times in all, leaving about 136 wedding dress photos among all of which Jennifer was in the same white low-cut and full-length wedding dress. According to the report of Daily Post, Jennifer took its simple style and tough material into main consideration at the beginning of selecting the wedding dress. Because she had to tuck the wedding dress into a backpack and flied tens of thousands of kilometers away to the Easter Island, after which she had to drive a car and climbed up to the volcanic vents around. It had proved that the wedding dresses was still in its original shape after different climate and places. 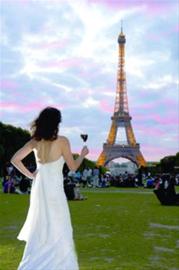 You might ask how they get the money to pay for the honey moon expenses. Both of them have full time jobs and they will budget carefully for the trip in some ingenious ways. Firstly, they seldom pay for plane ticket or accommodation at a higher price and go out with friend as much as possible instead. They released their travel experience as a picture-book, a wedding dress, a woman, a world, with excellent pictures and texts. All the income of the book is used on travel.

Geoff Salvador and Jennifer Salva Heat set up a website, also called a wedding dress, a woman, a world for the project, aiming at sharing beautiful scenery all around the world. There are some words on the website:” Jennifer, carrying her wedding dress, went for a trip aiming to exploring the world together with Geoff. This is why the honey moon that never stops begins.”