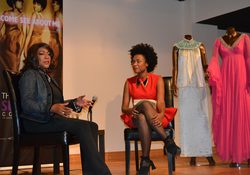 Mary Wilson was just a teenager when she signed with Motown Records and became an original member of one of the most important vocal groups in history, the Supremes.

Over the nearly two decades, from 1961 to 1977, that the Supremes performed, Wilson was the only consistent member. During that time, she made a point of keeping many of the dresses that the she and other members wore.

The dresses will be part of Come See About Me: The Mary Wilson Supremes Collection, an exhibit being curated by the African American Museum of Philadelphia. The museum will host the exhibit from January 25 through June 30, 2013.

Wilson, who was in Philadelphia yesterday and today to promote the upcoming exhibit, believes the fact that the Supremes not only sung well but dressed beautifully was a key factor in the group’s success. 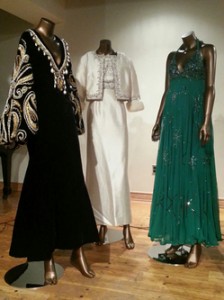 “We were three young girls who were glamorous,” said Wilson, who was in Philadelphia “I think the Supremes helped open lots of doors…we dared to dream.” Helping shape those dreams in fabric, beads and sequins where designers such as Bob Mackie, Michael Travis and Pat Campano.

“The gowns tell the story of an important era: the Supremes and the society that the Supremes helped to transform. The Supremes embodies style, class and integrity at a time when this were some of the only attributes that African Americans could legitimately claim in American society. The grace and confidence that the Supremes personified would inspire a nation and continue to serve as a shining example of modern Black womanhood — American womanhood,” said Dr. Mark Anthony Neal, professor of Black Popular Culture in the Department of African and African American Studies at duke University and guest curator for the exhibit.

In addition to the dresses, the exhibit will include rarely seen video footage, along with archival images, album covers and other artifacts.

Having this exhibit in Philadelphia is especially important to Wilson, saying “I always want to stay with my roots . . . and the African American Museum is the place the exhibit should be.”

Having come of age during the height of the African-American Civil Rights movement, Elsewhere asked Wilson for her thoughts on the LGBT community’s quest to secure same-sex marriage equality.

In her response, Wilson acknowledged having many close gay friends. She also admitted to having not given the issue a great deal of thought but stated that “maybe where we are going [with the approval of same-sex marriage] is where we are supposed to go.”

Three of the Supremes’ dresses are on display though January 6, 2013 at the National Museum of Women in the Arts in Washington, DC, as part of its Women Who Rock: Vision, Passion, Power exhibit.